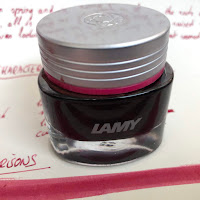 I like inks. I like red inks. My favorite ink color by far is Diamine's Oxblood. And at the same time red can be disappointing and frustrating. It is often brownish and in that case no competition for Oxblood, with the possible exception of P.W. Akkerman's Stone Red (Dutch masters series). Or the red is too pink (Bishamonten), too orange (Esenin), or simply too light (Rouge Caroubier). What I miss is a dark, but bright, saturated red.

Lamy's Crystal Edition Ruby looked promising in the store, in a great bottle and reasonably priced. In reality, Lamy Ruby is a decent, mediocre red. Not very saturated, but really red. I wouldn't use it in the office unless you have to grade or correct. Personal notes or correspondence? Only when short, the color is not bad, but not pleasant enough for the eyes for longer reads.

Decent is also the word I'd use to describe its behavior. Writing gives a dry feeling, lubrication could be better. There is no feathering, shading is low to moderate, hardly any show-through, and drying time is much faster than average, around 13 seconds on crown mill paper. When you spill water, you'll probably want to rewrite, but it remains legible.

Comparisons with a few other inks show that Ruby comes close to Herbin's Rouge Opera (although that one is even less saturated) and is a bit brighter and lighter than Diamine's Monaco Red or GvFC's Garnet Red. The last two have a noticeable hint of brown in it.

To conclude, Ruby is not a bad ink, but not a great ink either. It scores average on most aspects. And no, it's not that dark bright red I'm still missing. 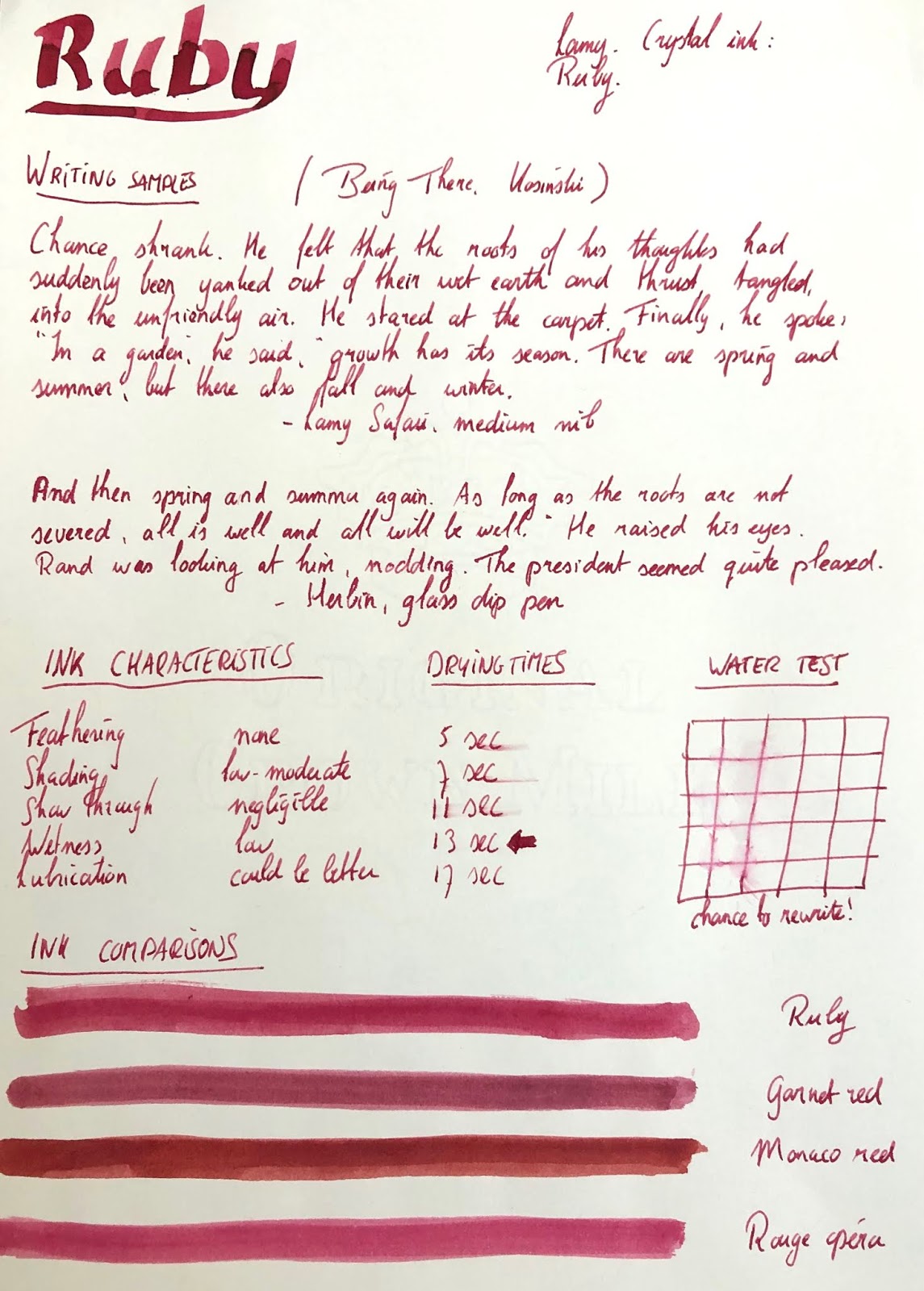 Popular posts from this blog

Around the World in 80 Days, Montblanc

August 04, 2021
Visiting Paris last month, I couldn't resist visiting the Montblanc flagship store and pick up a bottle of ink. Around the World in 80 Days is a limited edition ink, part of the recent collection about Jules Verne's description of Phileas Fogg's adventure. Nicely packed and in the well-known beautiful bottle. The ink is someone between blue and green, increasingly green in a wetter, broader nib. As such it is suitable for both the office as well as personal notes and correspondence. Personally, I like the ink best in finer nibs. It seems more dark and blue that way.  I have tried the ink on both Tomoe River and Rhodia paper. The ink behaved flawlessly and feels a little bit on the dry side. Drying time is neither slow nor fast, 40 secs on Tomoe River.  On Rhodia paper On Tomoe River (52g) The ink doesn't handle water very well, even after a few days the ink smears easily when some water drops are applied. Careful!  The full characteristics: F
Post a Comment
Read more

May 16, 2021
It's Spring, we just had King's day and the European Championships football are being held next month. More than enough reasons to fill up some pens with orange inks. I was surprised to see I had gathered eight inks in the past few years that qualify as orange. Some true bright orange, some leaning more towards red or brown. Which one is your favorite? Written on Tomoe river, 52g
Post a Comment
Read more

December 19, 2019
A few months ago this new ink series by Sailor was announced. Based on flowers, in a stylish 50ml bottle. What I see is not a flower, but an ink that is stormy blue with a hint of green. Teal? Maybe, but in my opinion it's darker than that, scans and monitors can be slightly deceiving. This ink can be a work horse. Very suitable for note taking, definitely works in the office, but also for personal notes and correspondence. The ink writes like a dream. It's not very wet, but smooth and extremely well-behaved in any pen. Just the combination crown mill vellum paper and a poster nib (as you can see), leads to some feathering of the ink. Drying times are simply fast, with just 12 seconds on this paper! Shading is low. Water resistance is low. Even after days it smears easily with just a tiny drop of water. I called this ink a work horse. It is, and an expensive one. Even though it's wonderful ink, it's simply not special enough to justify the price. Yonaga (Sailor)
Post a Comment
Read more